Security forces on Saturday claimed to have killed a hardcore NDFB-S militant who was involved in the December 23 Adivasi massacre in Kokrajhar.

According to Kokrajhar SP Sunil Kumar, identified as Jeblang alias Jagat Basumatary, he was the platoon commander of the anti-talk faction of the outfit. He was killed during a combing operation by police and SSB at a remote area near Serfanguri around 2 in the afternoon.

Kokrajhar SP Sunil Kumar told Assam Times that  acting on a tip off police and SSB launched a  operation in the entire area at noon. As the security forces reached the location NDFB(S) militant started firing  forcing police to retaliate where Basumatary was killed  and other 3-4 cadres managed to flee. The search operation continues. 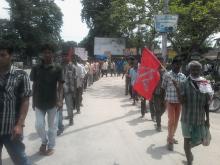 14 Feb 2008 - 4:51am | editor
The Peoples Committee for Peace Initiative in Assam has sponsored a statewide dharna on Wednesday demanding immediate release of human rights activist and PCG member Lachit Bordoloi with noted lawyer...