Hundreds of people in Kokrajhar hit the streets on Monday in protest against NDFB-S violence and demanded measures to ensure their safety and security.

People in large number representing the various local organization joined the missive against the outfit saying that they won’t tolerate bloodbath any more.

After shouting slogans against the outfit, the organization submitted a memorandum before the Kokrajhar DC demanding strict action against the insurgent outfits including NDFB-S and KLO and sealing of Indo-Bhutan border and Assam-Arunachal Pradesh to stop movement of the insurgent activists.

They further stop the political parties and organizations to stop trading charges and counter charges against each other in the name of condemning the violence.

In search of divine help

21 Feb 2017 - 6:23pm | AT Kokrajhar Bureau
A week-long Maha Rudra Biswa Shanti Yagya being held at Mahesh Mandir at Subashpalli in Kokrajhar,heart of BTAD administration.Devotee and worships from different parts of the district and its... 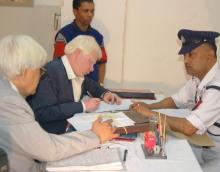 21 Jan 2008 - 2:09pm | editor
Two leading officers on Monday deposed before the Manisana Singh Commission which is probing the Beltola clash that rocked the state on November 24. They are are Guwahati city executive magistrate...

27 Mar 2014 - 12:06am | Hantigiri Narzary
Prohibitory order under section 144CrPC has been issued by the Addl. District Magistrate, Chirang Sailendra Kr. Das, against the every possibility of breach of peace and tranquility among the people...