Campaign against poaching and encroachment 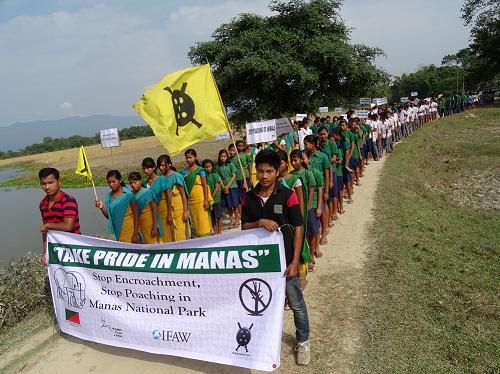 In continuation of the Manas Pride campaign, IFAW- WTI in association with the Department  of Forest and All Bodo Students Union (ABSU), Betbari, carried out an anti-poaching and encroachment campaign through ‘Human Chain’ formation at Betbari, Bhuyapara Range, Manas National Park. The awareness campaign was held on 29th November at the Fungbili ME School, Betbari.

The two-day ‘Human Chain’/ Rally campaign saw participation of school children, WTI team, local NGOs, ABSU,  Sashastra Seema Bal (SSB), AAVA (All Artist Visual Association) and representatives of the local community. The aim of the campaign was to highlight the massive encroachments at Bhuyapara Range of Manas National Park. More than 250 students from Fungbili ME School, LP School, among others participated in the 3-km Human Chain/Rally from Fungbili ME School to New Betbari Village. The participants raised slogans urging people to stop encroachment and poaching in Manas NP.

The second day of the campaign saw a daylong workshop being organised on the theme of 'Paintings Inspired by Nature' at the Bansbari Range, Manas NP. Along with AAVA, school children from Manas High School and Bansbari ME School participated in the workshop. The aim of the workshop was to promote conservation amongst children through art and painting .

Bharat Baro, President, ABSU, Betbari, said, “The forest is of utmost importance for the well-being of the planet. Russian-American novelist Ayn Rand had said that the difference between animals and humans is that animals change themselves for the environment, but humans change the environment for themselves." He added that humans will have to adjust and change for the well-being of Mother Earth and such awareness programmes help in changing the mindset of the forest dependent villagers.

Dr. Bhaskar Choudhury, Regional Head, WTI, said, "It is of critical importance that the future generations are made aware about the  significance of conservation. Through these campaigns we are trying to build a brigade of future conservationists who would be mindful in tackling the dangers that confront our natural heritage."

Saran Narzary Head Village Man Betbari said “School Children of the region is our future protector of Manas as our Heritage. Our support is with the WTI and nature enthusiast organizations to save the nature from extinction”

Kishor Das, General Secretary All Artist Association of Visual Artist (AVA) Assam, “art is the simplest language of communication. Through this medium we tried to inspire the younger generation for nature painting of Manas for future conservation”.

1 Jul 2015 - 1:52pm | AT News
Security forces had apprehended four hardcore militants of NDFB(S) including a self styled commander and a arms dealer in Meghalaya’s East Jaintia Hills district on Sunday, police said on Monday....