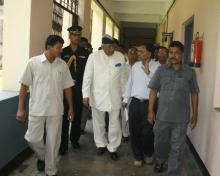 18 May 2008 - 3:30am | editor
Assam Governor Lt general (Retd.) Ajoy Singh on Saturday has visited Gauhati university campus and discussed the administrative matters with registrar in charge. Later talking to the journalists he...