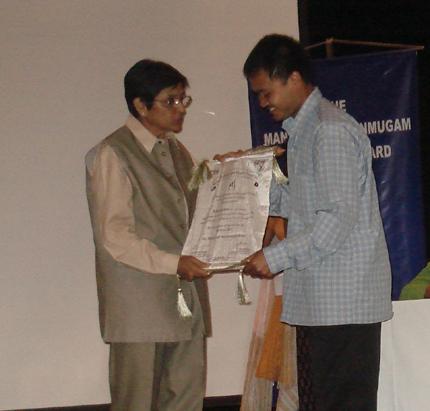 Young social activist and Krishak Mukti Sangram Samiti president Akhil Gogoi received the prestigious 2nd Shanmugam Manjunath Integrity Award from the Magsassay awardee Kiran Bedi at a function held on Friday at the IIT Seminar Hall, New Delhi. Giving away the award Magsassay Award winner encouraged Mr Gogoi for his relentless and untiring efforts to ensure transparency between public life and government functionings. Mr Gogoi who hails from upper Assam’s Golaghat district has been awarded for his fight against corruption.

The award is dedicated to encourages those who work to uphold the values of truth and honesty in Indian corporate, government and public life.

The award has a citation and a cash prize of Rupees One Lakh.

Manjunath Shanmugam, Alumnus of IIM Lucknow, was a Indian Oil sales officer, who unfolded adultration of fuel by a IOCL dealer in Lakhimpur Khiri area of Uttar Pradesh and later he was killed by the IOCL dealer.

Permalink Submitted by Kamal Kumar Tanti on Tue, 24/06/2008 - 23:53
Akhil Gogoi is the Secratary of Krishak Mukti Sangram Samiti, NOT the President.

Permalink Submitted by Pradip Kumar Datta on Sat, 28/11/2009 - 06:29
Akhil Gogoi is a brave person who is fighting against the goons and corrupt politicians and officials who are looting public money. Government should provide adequate security to him. Thanks Akhil da Pradip Kumar Datta (Silchar, Assam)

Permalink Submitted by Naren on Tue, 22/12/2009 - 08:31
"Akhil Gogoi, you are truly an inspiration. I heard several people talking about doing something about corruption but you actually did something about it. I wish you best of luck. Naren Curently in Boston, USA origin Hyd, AP

Permalink Submitted by Yuvaraj on Sun, 11/07/2010 - 02:36
I hope the strength in his commitment grows with the days.Yes, he has arrived. But arrival is the starting part of the story to begin.I hope this continues. He needs support. But he must never be disappointed and depressed with any hurdles that may come to him. I hope he stands by his ego and his attitude make him more stronger, more enlightented in his vision. He has a lot to do. Thanks for your contribution. Akhil da!

Permalink Submitted by Deepu Kumar Borah on Wed, 14/07/2010 - 14:14
We need people like Akhil Gogoi to save Asom and it's rich culture. Politicians boost of various packages for millions of poors but who created these poor people in a self sufficient state like Asom. Because of very poor management, the Asom is in a very bad situation and immediate action is required to protect interest of indigenous peoples of Asom. DK Borah

Permalink Submitted by Pankaj Deka on Thu, 15/07/2010 - 04:56
Peasant protesters peacefully returning from D C office Guwahati without submitting memoranda has been a morally higher & victorious job than taking law onto one's own hand. The Congress govt perhaps wanted to enact another Beltola incident so that later on they can blame peaceful protesters of violence. The autocratic govt must be ashamed now of mistaking a Democratic protest to be martial protest. Today's protest may remind us of Gandhiji's Satyagraha. truth always wins. Regards to all

Permalink Submitted by Devajeet saikia on Sat, 17/07/2010 - 18:23
it is great to see someone taking the might against corrupt politician like Himanta . carry on the good work like a true social activist you will succeed we are supporting you dear Akhil. My only request:- you seem to be the proverbial "last straw" , dont enter politics and ditch the indegenious people of Assam like many of todays politicians did in recent past. Assam has enough of it's share of betrayal by her son of the soil. we can ill afford more!!!

Permalink Submitted by Bijoy Sarma on Sun, 18/07/2010 - 05:26
I can remember the day when you came to our KKH hostel for campaining for GENERAL SECRETERY of cotton college student union in 1996.Go ahead --- we are proud of you. BIJOYDA DULIAJAN

Permalink Submitted by Manoj Kr. Bora on Sun, 18/07/2010 - 16:49
Shraddhar Gogoi,Namaskar.I m not rich by money, not even poor by honest mentality.Want to be a micron part of the war led by KMSS with a small monitary contribution for life time out of my earnings from hardworking profession and not from other sources like Himanta.Awaiting consent from KMSS.

Permalink Submitted by Manoj Kr. Bora on Sun, 18/07/2010 - 21:31
Shraddhyeo Gogoi, Namaskar jonalu. I m not rich by money, not even poor by honest mentality. Want to be a micron part of the war against corruption led by KMSS by small monitory contribution for life time out of my hardworking profession and not by any other source like Himanta.Awaiting for consent from your end. With regards, Manoj Kr. Bora, Tinsukia.

Permalink Submitted by Anup Borah on Mon, 19/07/2010 - 20:02
Akhil Gogoi's fight against corruption is really inspiration for the people of Assam. However, he should be cautious in his actions so that these dirty politician could not trap him for false reasons.

Permalink Submitted by Kangkon Kanti Borah on Mon, 19/07/2010 - 22:04
Thanks Akhil Gogoi, You are fighting against the Congress Government of Assam. We are supporting to you.

Permalink Submitted by MUNNA BHAI on Mon, 19/07/2010 - 22:34
Leader like akhil da ....need for society... to change the society...I like Congress party ....but not blind supporter....congress leader now playing autocratic role as his/her personnal party....every should remember it. Presently Leader love himself, not party. I AM ASKING ONE question to CONG.LEADER-----WHY HE JOIN THE PARTY? HAS HE QUALITY TO LOVE ""INDIA....INDIA.....INDIA"

Permalink Submitted by Montu Swargiary on Wed, 21/07/2010 - 23:23
ARRIVAL OF A TRUE LEADER AKHIL: The term 'gathia' (short statured) used by BTC chief Hagrama Mahiliary for Akhil Gogoi on the July 18 Congress-BPF rally is not in good taste. KMSS secretary is fighting corruption. Had Bodofa Upen Brahma been alive, he would have been proud of Akhil Gogoi and not Hagrama Mahiliary. Akhil Gogoi's manner of protest is democratic like the one by late Upen Brahma. He is the re-incarnation of Bodofa Upen Brahma, this time for entire Assam. Neither Hagrama nor Ranjan Daimary have folowed Bodofa's ideals. We would have loved to hear Hagrama speak when Udalguri was burning in 2008 Bodo-Bangladeshi riots. Suprisingly Hagrama was silent then.

Permalink Submitted by KD on Fri, 27/08/2010 - 18:31
Mr. Gogoi, Please upload the imporant documents in the internet. If you do that it will be saved forever. Use youtube or google or anything like that.

Permalink Submitted by Smrity Kalita/Namrup on Mon, 30/08/2010 - 14:28
Good wishes. You fight against corruption,we are with you.But dont hang up the matter ,please remove and display the root.....

Permalink Submitted by M.Chetia on Thu, 02/09/2010 - 04:12
Akhil is an icon fighting curruption in Assam now. No doubt, he needs support, simplying saying some thing, appreciating him is not going to help.Let us do or get our necessary official jobs (in govt offices)done without bribing. This will be real support to him. Good wishes M.Chetia, Mumbai

Permalink Submitted by Narayan Kalita on Fri, 02/09/2011 - 17:17
Mentally strong people can do something for the nation. I know Akhil is a very strong in mind. We all should support him. Go ahead Akhil…