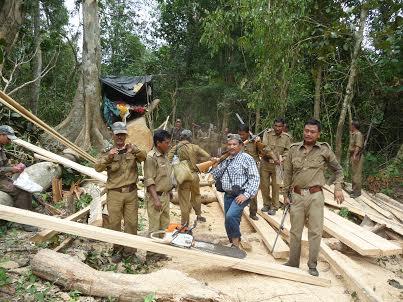 ABSU Udalguri district committee has come out in open to stop illegal tree felling and poaching in Udalguri district bordering Bhutan resulting an operation launched by the Range office, Nonai Reserve Forest and ACF, Dhansiri Division,Udalguri inside Nonai Reserve Forest ( in Bhergaon Sub-division) at Kharmati at around 11.30 a.m.On 14th October, 2014, Tuesday, against the timber smuggler and tree poachers inside the forest.

Exchange of fire took place between forest forces and poachers during the operation.The forest team was headed by Raju Brahma,ACF,Dhansiri Forest Division. One power chain saw, 20 Nos. of cycles and 300 KB timber had been recovered from the area. An illegal camp of the timber cutter has also been damaged at the location. 20 Nos.of smuggler, somehow managed to escape during the operation taking shelter of heavy jungle.It needs mention that rapid deforeststion has caused so called “Man-elephant conflict” in the district causing deaths of 20 people in 2014 alone.Dipen Boro,Advisor and Nerkhang Khaklary,President Udalguri district committee of ABSU told this correspondent that ABSU had decided to launch massice campaign agaist deforestation and poaching in the district and would be supporting district civil and forest department in the interest of flora and fauna of Udalguri bordering Bhutan.

30 Mar 2014 - 1:21pm | AT News
Akhil Gogoi has dropped yet another bombshell against Tarun Gogoi when the KMSS was airlifted to Titabor on Sunday.Talking to reporters before leaving Guwahati, the KMSS leader said that the chief...

18 Feb 2008 - 4:11am | editor
Assam BJP leadership has come in for sharp criticism following the party’s poor performance in the recent panchayat polls. Several leaders within the party have openly criticized the state unit...

3 Aug 2012 - 10:01pm | editor
The situation in BTAD areas and Dhubri is rapidly improving. But the security forces are still patrolling in these violence-hit areas.Flag-march by army and patrolling by police and para-military was...