And now it’s the green bridge idea that strikes the mind of chief minister Tarun Gogoi. Lunching the Swachh Bharat campaign in Guwahati on Sunday, Gogoi announced a Green Brigade to boost the cleanliness drive.

He said that a permanent committee is on the cards in all localities to keep the area neat and clean. Awards will also be given for cleanliness drive," he said.

Gogoi said his government would take up the cleanliness drive in a mission mode across the nook and corner of the state. 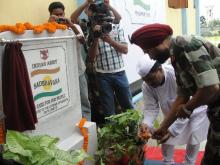 20 Jan 2014 - 7:59pm | AT News
Prime Minister Dr Manmohan Singh said his Government viewed infrastructure development in the North East as a key element in the strategy for developing the region and increasing connectivity with...