A surrendered ULFA cadre has made a startling revelation on Tuesday that ULFA utilizes its newly recruited fellows in the strikes against Hindi speaking people along with army and police. After surrendering before Dibrugarh district administration officials ULFA cadre Partha Kachari said the new cadres are forced to run ULFA's attack. He also said the banned insurgent outfit has been imparting arms training for as many as 50 member. He also revealed that he was among those who was asked by the top fellows to carry out strikes in Naharkotiya on March 13. Partha is the son of Rudra Kachari of Faltutala gaon in Jaypur in Dibrugarh district in upper Assam. He surrendered before the authorities at a function on Tuesday at the Daulot Singh Negi Guest House with a hand grenade. 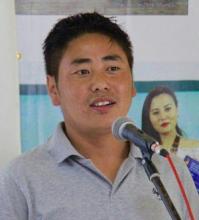 12 Oct 2016 - 11:27am | Lester Makang
Of late, there has been a good deal of talk in the Tangkhul film community as well as in social media about the ongoing shooting of the second feature film by the Meiphung Production, post box office...