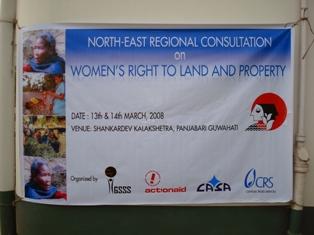 A two day Regional Consultation on Women's right to Land and Property in North East India concluded on 14th of March 2008 at Sankardev Kalakshetra, with a consolidated plan of action with regard to issue. The consultation focused on the Impact of Look East Policy and Neo-liberalization, violence against women, customary laws in relation to land and property rights of women. Mrinal Gohain, Regional Manager, Action Aid speaking in the context of Neo-liberalization mentioned about North east being a focus area for mega development projects like dams for power generation, infrastructure development connecting South East Asia. He raised his concerns on the impact of this on the people of the North East and appeal to the house to group together to get clear evidence of how Neo-liberal policies are affecting the region. Patricia Mukhim, eminent Journalist from Meghalaya expressed that the abolishing of International Borders under the banner of free trade would not only attract market investors but also other antisocial activities like child and women trafficking, prostitution, drug trafficking etc.

Gina Shangkham, activist from Manipur, point out the vanity of Land revenue and Land Reform Act, 1960 particularly in the hills of Manipur, thus compelling the customary laws to prevail. It was attended by various organizations, women activists, journalists and grass root level workers. The Chairperson of State Women Commission from Assam, Manipur and Meghalaya spoke on the inaugural sessions of the consultation

Birubala Devi from Goalpara who has been nominated for Nobel Prize, 2005 for her dedicated efforts to fight against the evils of witch hunting was felicitated on the occasion along with 5 other women activists who are making a difference at different places in the North East on the rights issues.

This consultation was a part of the national level campaign on women's right to land and property and aims to build an understanding of the status of women's right in the context of North Eastern Region. It was organized jointly by Indo Global Social Service Society (IGSSS), Action aid, Churches Auxiliary for Social Action (CASA) and Catholic Relief Services (CRS).

Permalink Submitted by C Kashyap on Sun, 16/03/2008 - 05:23
It is true that most of the customary laws are not favoring women when we see it from the land and property perspective. But now as time has changed it is important that changes are needed and both male and female should get equal property and rights, it is the time to challenge such laws and come forward for our rights. Being woman i feel that we should demand for the rights and not to quite till we get what we deserves.

1 Nov 2014 - 9:00pm | AT News
A daily wage earner died a tragic death when a boulder fell on him in Morigaon district on Saturday. The incident took place atop the Sonaikuthi hills in Jagiroad when a huge boulder rolled down the...