More rains seem to have brought misery for Majuli. The largest river island on this planet is now cut off from the rest of the world after the Brahmaputra river waters washed away the surface communication points.

Over 100 villages in this seat of Vaishnavite culture has come under the flood wave displacing over 1 lakh people during the last 48 hours. That authorities claimed to have intensified relief and rescue operation. But a section of the marooned people have deplored that these measures have yet to reach them.

The situation is set to deteriorate further as the water level of the mighty river is still on the rise. The weathermen have already predicted no let up in the rains across the state.

14 Jul 2015 - 7:49am | AT News
The All Assam Student Union has called off the 100 hour ONGC bandh which started on Monday.Talking to Assam Times, Sivasagar AASU leaders said that the decision was taken at their tripartite talks... 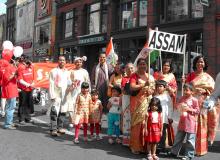