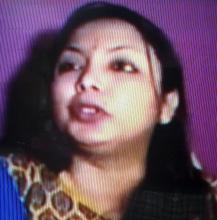 14 Apr 2015 - 10:44am | AT News
Congress MLA Rumi Nath has been arrested by Dispur Police this morning in conenction with a nefarious car lifting case. She is now being interrogated at Dispur Police Station against two cases...

6 Oct 2012 - 11:50am | editor
Violence resurfaces in Karbi Anglong when a KRA militant was killed at clash with UKDA militant on Friday. The clash took place in the evening at Sinhasan hill where the KRA militant died on the...