Expressing displeasure over Ranjan Daimary,founder chairman of NDFB, over hundred cadres from NDFB(Ranjan Daimary faction) joined the NDFB (Progressive) lack of clear objectives from Daimary on the solution of Bodoland issue at a function held at Serfanguri Designated camp in Kokrajhar on Saturday.

The NDFB(Progressive) welcome and felicitated all 104 cadres who were joined NDFB(P faction) parting  from the founder chairman Daimary alleging lack of clear objectives for the cause of Bodo issue and deprive from ceasefire ground rules.

Cadres after joining the NDFB(P) said that they had quit from the Ranjan Daimary faction for lack of clear objectives on the Bodo issue. He alleged that neither basic amenities were provided in the camps nor an identity card has been provided to them.

Govinda Basumatary @ B Swmkwr, General Secretary of NDFB (P) said that the cadres were depressed with the functioning of the ground rules by the Ranjan Daimary camp for which the cadres had joined the NDFB (P).
“There was every chances of these cadres joining the NDFB (S) faction had not the NDFB (P) accepted their request for joining in the ceasefire camp”, Basumatary said.
Recalling the 2008 split within the NDFB, he said that Ranjan Daimary had objected the charter of demands submitted by the NDFB (P) as per the constitution of India.
As a result Ranjan Daimary moved away from the Ceasefire for the sovereign Boroland.
He criticizes that Daimary could not take static stand on their demands.
Basumatary has expressed his hopeful that the on-going paece talk with the Government of India would yield better result in the Narendra Modi led NDA regime.
He has also appealed the NDFB-Songbijit faction to join the mainstream through the democratic process and start negotiation with the Government of India.
Meanwhile,B Naijab secretary for information & publicit of NDFB(Ranjan Daimary faction) in a press release refuted the claim of more than 100 NDFB cadres joining NDFB (P) at Serfanguri designated camp is a sheer lies and baseless.
“There may be a few deserters from NDFB and NDFB (Songbijit) who have joined them in the last 1 year but majority of them are civilians only who work for them and for other organizations”, the release said.
“We condemned such malicious drama, staged by NDFB (P) and appeal them not to malign NDFB in the future for the greater interest of our nation”, it added. 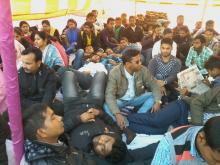 12 Jan 2016 - 8:15pm | Hantigiri Narzary
At least 20-agitator teachers’ health condition  turned to deteriorated, among them seven were reffered to hospital on its second day of 72-hours long hunger strike at Rashmela ground of Lower...