Tinsukia police arrested four persons for allegedly extorting money from tea garden authorities in the name of ULFA on Tuesday.

The fake ULFA militants were nabbed from Dholla in Tinsukia when they arrived in the tea garden office to extort money.

Police officials were waiting on their way to the tea garden office acting on the prior information on Tuesday. Interrogation is going on. / 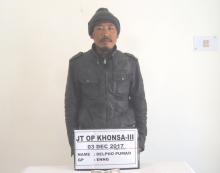 7 Mar 2013 - 6:22pm | Anup Biswas
In a joint operation, one Laksham Lobongdisa, active cadre of Dimasa National Liberation Force was apprehended by 9 Madras and Assam Police at Maibang on Wednesday.It is learnt that a group of three...