Dissident Congress legislators are trying their level best to corner the Tarun Gogoi government in the upcoming assembly budget session.

Led by the outgoing education minister Dr Himanta Biswa Sarma, the dissidents are scheduled to meet in Dispur on August---just 2 days before the assembly session to formulate their strategies.

A dissident MLA who refused to be named told Assam Times that they would criticized the anti people policies of the Tarun Gogoi government to justify their dissidence against the chief minister.   / 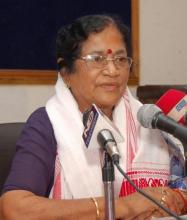 22 Apr 2008 - 4:06pm | editor
Assam BJP firbrand and former Union minister Bijoya Chakravarty says her party is not averse to forge poll pact with Asom Gana Parishad. Talking to reporters recently in the city, she has said the...

14 Apr 2008 - 3:31am | editor
Assam is celebrating its much-vaunted Rongali bihu from Sunday with a clarion call to the misguided youths to eschew the path of violence. Sunday was garu bihu. Cattle in large number across the...