Tension seems to have been escalating in Baksa district a day after unidentified gunmen shot dead a person sending shock and anger across the BTAD areas.

The gruesome incident took place when Manoj Das who was involved in many no Bodo organizations was shot dead from a point blank range by four gunmen at 9 in the evening at Musolpur.   Then the miscreants fled away from the spot.

Security forces arrived in the spot and started combing operations to nab the culprits. But there is no report of any arrest in this connection.

Apprehending group clash rerun, the authorities have clamped 144 CrPC in the entire area.

In yet another incident, unidentified miscreants on Wednesday night burnt down a local BPF office in Baksa which is believed to have compounded the problem. 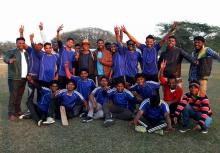 17 Feb 2017 - 8:54pm | Robertson Tanti
Sahara Club under Hattigor tea estate was registered in the year 2011. And since its conception, the club could not run smoothly due to the inconvenience faced by the then president and secretary,...

FIR against Rumi, Jakir in Dispur

7 Jul 2012 - 12:50am | editor
Fresh trouble awaits Congress MLA Rumi Nath and her second husband. A legislator of her own party on Friday filed an FIR against Nath alleging that the couple had illegally entered his residence and...