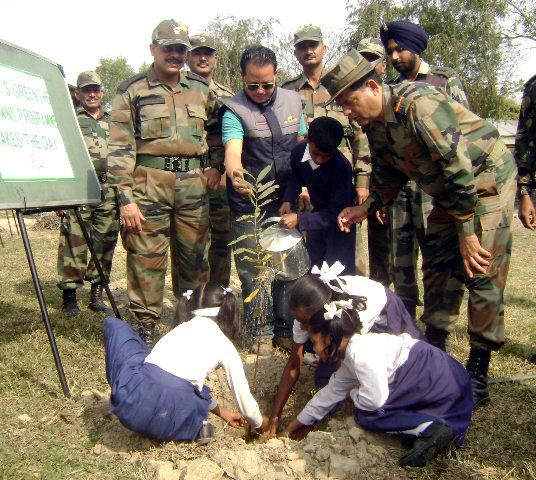 The Dah division, under the aegis of 18th Bn The JAT Regiment, conducted an Environment Awarness Campaign on February 22 at Dibrugarh to spread the message among the youth about deforestation, degradation of the environment, pollution and also how to take remedial measures to mitigate negative effects of man made and natural occurrences to the environment in order to ensure that all of us enjoy a safer and more prosperous future.The Campaign comprised of lectures for students, a Workshop on Environment Protection and a Tree Plantation Drive under the supervision of environment experts of the Army. A large number of students and teachers from the schools of Dibrugarh, participated in the programme and made the event a success by fostering “ Environmental Activism”, educating the youth of our social responsibility towards environment, stimulating public action, and empowering the youth to become active agents of sustainable and equitable development.This unique initiative of the Dah Division was lauded by the students, teachers, fraternity and the general public who had actively participated in the campaign.

16 Jul 2016 - 2:55pm | AT News
An escalating tension keeps Raha on the boil after a local resident died in police firing when he along with thousands of people enforced a bandh on the National Highway No 37 demanding the proposed...