The All Bodo Student Union (ABSU) allegged that the tribal and indigenous peoples in the state are depriving from all fronts of developments due to the negligence of the governments.

The special convention of the students union with the coinciding of the observance of the 27th death aniversary of Martyr Sujit Narzary,first martyr of Bodoland movement being observed at Patgaon in Kokrajhar,today enters second day.

Promod Boro,president of the ABSU said the Bodo and other tribal and indigenous peoples are facing severe hardships in all fronts like education,socio-economic,of which why tribals still remain very under backwards.He said that tribal belt and blocks are illegally occupied by suspected illegal migrants due to the governments’ loose governence in the state.  He has demanded early evictions of illegal migrants from tribal belt and blocks so that indigenous people get their sustainity with their traditions.

He said the students union discussed on various issues related to the Bodos and other tribal communities in the state, including on Bodoland, protection of tribal belts & blocks, illegal migrants and on education problems in the convention.

He said the tribal people were forced to struggle, launch movement for the safeguard of themselves, their culture, language. ‘There is need of unity among tribal unity. Not only among tribal but also time has come for unity among indigenous groups. Assam is venerable state due to illegal migrants from Bangladesh, he said adding that huge chunk on tribal belts& blocks and forest ladn have been encroached upon including by suspected Bangladeshis.

He said that the students union has been demanding the solution of the pending Bodo issue within the constitutional framework of the country, by which ‘we can protect the identity, existence and security of land and people and also can preserve the language, culture, literature and tradition of the down trodden community like Bodos, by which we can ensure socio-economic development, political right of this indigenous community. He has also urged the new govt at the centre to keep the spirit in the manifesto during the election on smaller state. 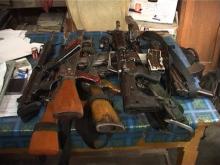 15 Dec 2014 - 7:08pm | AT News
The decline of militant activities is very much in the lips of the government. But all these are tall claims if the facts and figures placed in the Assam Assembly on Monday are any indication.Forest...