Assam additional director general of police AP Rout said that there are 10 additional paramilitary companies arrived in BTAD to take security measures, of which three for Kokrajhar district. Taking stock of the Balapara incident and Rout visited the killing spot at Balapara under Tulsibil police outpost in Gossaigaon sub-division, Kokrajhar on Friday. He said that NDFB (Songbijit faction) was behind Balapara killing based on information with the police. The government sent additional 10 paramilitary companies to the BTAD region. Police pickets would be be set up in sensitive areas. Strong operation would be conducted immediately to nab the culprits, he said.

He appealed to all sections of community to maintain peace and harmony in the region.

Minister Siddique Ahmed and Parliamentary Secretary Atuwa Munda also visited Kokrajhar and took stock of the incident. They also appealed for peace and unity in the region.

6 May 2014 - 8:38am | AT News
The overall situation in BTAD areas remained normal. There is no report of any untoward incident during the last 96 hours.Baksa, Chirang and Kokrajhar district administration have relaxed curfew from...

11 Jul 2017 - 7:40pm | AT Kokrajhar Bureau
Founder president of the All Bodo Students Union(ABSU) and noted writer Baneswar Basumatary is seriously ailing since few months. Basumatary,who is hailing from Koklabari of Baksa district has been... 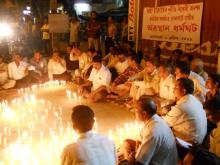