For Jeena Gogoi, it's a long spell of 21 years to get her husband back. Prabin is back since he was missing from atop Arunachal Pradesh while he was on duty. But the 10th Assam Regiment Subeder finds it quite difficult to remember everything and even his mother tongue.

Trouble was brewing in the family as soon as Prabin, a resident of Charing Baruwati gaon in Sivasagar district was found missing from Tawang in 1987. His wife Jeena was staying at a rented house at Melachakar in Sivasagar town with three children when her husband was missing from Arunachal Pradesh. The message that shocked Jeena, her three children and relatives was received just a few month before the birth of the fourth one. The elder daughter was five years old, the second one was four while the third son turned two. Jeena left for her father Indreswar Baruah of Deoraja near Amguri. During this period of stress and strain, the elder daughter got married. The son and daughters are now bachelors degree holders. The youngest one Sumi is also pursuing her degree course.

But Jeena cannoit forget the day she received the news of Prabin's missing from duty from Army sent through the police. But she was confident her husband was very much alive. This confidence was there even after she obtained a death certificate in 2003 from Army. She refused to wipe out the vermillion mark from her husband.

Very recently, her confidence proved true. Prabin reached his brother's home in Jorhat who is no longer alive and the sister in law also failed to confirm Prabin's identity forcing him to leave for his aunt from where he was rescued by his family members. The family members are happy with this.

Now Jeena and her children and other relatives are getting a fresh lease of life.

Permalink Submitted by Papul Jyoti Gogoi on Sun, 28/09/2008 - 00:28
So happy to hear and read about Prabin. I am also from charing Dulia goan now boarding at Dibrugarh.

28 Jul 2014 - 9:51pm | AT News
The Confederation of Indian Industry has reiterated on taxation, policy and administrative issues and also on issues mandating special provisions in the state budget. In its a pre-budget memorandum...

5 May 2014 - 8:36am | Hantigiri Narzary
A full scale combing operation is going in BTAD areas after 36 people died in a string of attacks on the religious people.Army, police and para military forces have cordoned off a huge area in worst-... 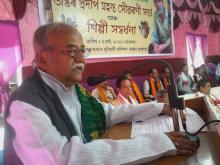