23 Jan 2012 - 2:58am | Anup Arandhara
The 27th conference of “Sivasagar district Academic Council” from January 18-19 was held at Ghilaguri High School, Khaloighugura, concluded successfully. In the open session the... 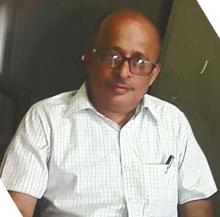 14 Aug 2015 - 4:46pm | AT News
There is no let-up in the condition of senior journalist Hiten Mahanta who has been undergoing treatment at the GNRC Hospitals in Guwahati.He was brought to GNRC on August 5 immediately after he was...