Shock and anger in Kokrajhar

Utter shock and anger seem to have gripped Kokrajhar a day after three members of a family were killed in the name of witch hunting.

The incident took place at Borjhora village in  Monglajhora area under Bogribari
police station  where the trio remained clueless.

Police have so far arrested 13 persons in this connection after two bodies were exhumed from a jungle.

The entire incident came to light after the victim's youngest son, who is a constable with 7th AP Bn got to the incident .
According to Suresh, victim's elder son who lives nearby, about 10-15, with sharp weapons came  on the evening of Wednesday and forcefully
took away his mother (Bangali) and d elder sister Malati  and threatens of dire consequences if they informed anyone about it. 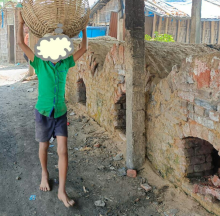 23 Mar 2022 - 4:05pm | Mithun Baruah
When the Government is strict against child labour, it unfortunately happens at  Margherita, where at Coke Factories, Coal Thieves hire Child Labour to work with low wages. There are more...