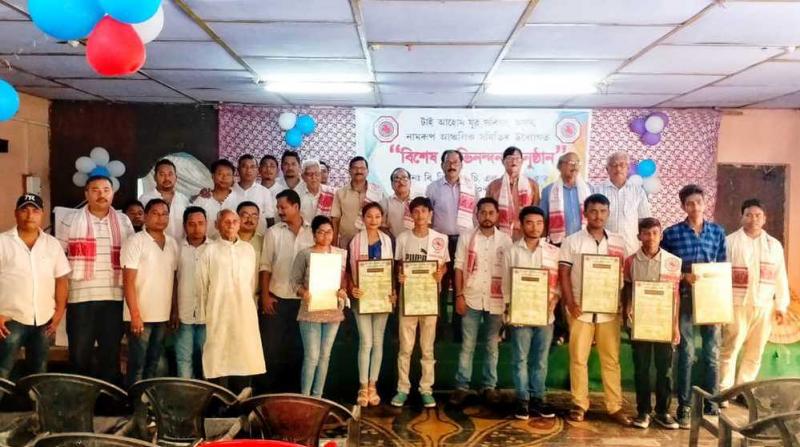 NAMRUP :- In an effort to inspire the students the meritorious students who excelled in HSLC and HS examinations were feted at a  programme held in BVFCL Officers Club organised by  Namrup Tai Ahom Yuba Parishad regional committee on Sunday. The event presided over by Diganta Gogoi initiated with a religious prayer in a bid to gain prosperity and blessing from the almighty to all the meritorious student for their bright future .  The programme was graced as chief guest by BVFCL Chief Administrative officer, Pranab Kumar Bhattacharjee. Speaking on the ocassion, general secretary of Tai Ahom Kristi Kendra  Tileswar Borah laid emphasis on exemplifying ancient universities like Nalanda University which was established on 427 B.C. "Our ancient education system was on top notch than modern education system and for that reason the foreign nations have adopted the Indian  Culture, and even prayers are made compulsory in their academics." ,he added. The event was also attended by senior citizen Puwal Boruah , District Publishing secretary Manash Pratim Gogoi , Tai Ahom Yuba Parishad Regional President Papu Chaliha , Principal of BVFCL HS School Namrup Hiranya Hazarika among many others..

10 Apr 2011 - 1:47am | Juthika Das
Barpeta district administration is ready for the 2nd phase of Assam assembly Election 2011. All the arrangements are ready for the poll. The vote cast will be held in 1132 polling centres in the 6...

10 Jan 2018 - 9:44am | Akshaya Pranab Kalita
The bodybuilding fitness competition organised by Prince Fitness Centre  Rajgarh in collaboration with all citizen of Rajgarh in coordination with Dibrugarh, Tinsukia and Sibsagar District has...