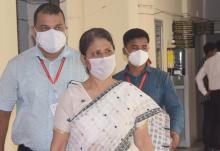 19 Jul 2021 - 11:09am | AT Kokrajhar Bureau
Various parties and citizens of Kokrajhar, including CPI-M, have criticized the Budget presented in the ongoing Budget Assembly session on Friday by Finance minister Ajanta Neog for 2021-22 financial...

19 Sep 2012 - 3:14am | editor
Assam Chief Minister Tarun Gogoi o Tuesday faced flak for supporting 51 per cent FDI in multi-brand retail. CPI(M) criticized him alleging it an attempt to introduce the concept in the state will...

30 Dec 2016 - 10:48pm | AT Kokrajhar Bureau
The Bodo Sahitya Sabha (BSS) and All Bodo Students Union(ABSU) expressed concern over the killing of innocent people in false encounters by security in the name of curbing militancy in the State....