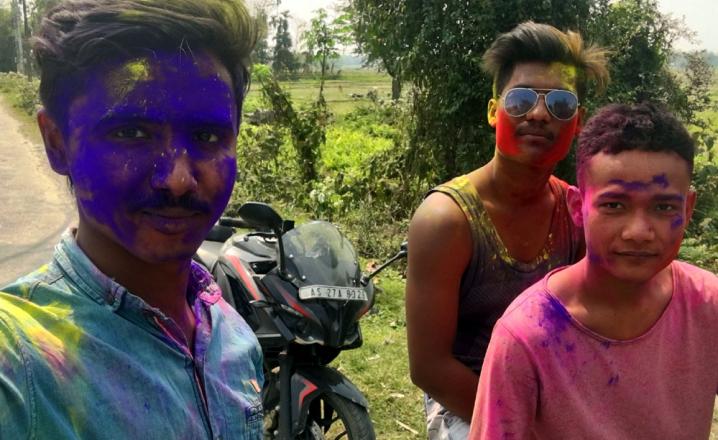 People from all walks of life - irrespective of caste, colour,community and religion joined in unison to celebrate Holi- the festival of colours with gusto in different parts of Udalguri on Friday.Community celebrations also marked the occasion were the faithfuls took out a procession throughout Tangla town on Friday.Holi revellers specially youths comprising boys and girls were also seen descending on the roads and streets in their hordes and lending a carefree ambience to the celebrations. Young children with their dresses smeared and drenched in Holi colours splashing water baloons at each other presented a lovely picture."Holi is a shared colourful heritage and spirited carnival of the Indian irrespective of faiths " said a school student ,Rashik Khan smeared in Holi colours."Colours bring so much joy,may the cheer of colours always remain in our life",said another school student,Krishnamoni Tanti.The colours of the festival generated an ambience of good will and people participated in different functions that were held on the occasion.

29 Aug 2017 - 9:24pm | AT Kokrajhar Bureau
Hundreds of venture school teachers from BTAD areas staged a five-hour dharna in front of DC office in Kokrajhar on Tuesday demanding steps to provincialize their schools and to, amend the...

16 Feb 2009 - 4:37am | editor
A Karbi Longri National Liberation Front (KLNLF) militant was killed in an encounter with army in Karbi Anglong district of Assam on Sunday.According to information, the encounter took place when...