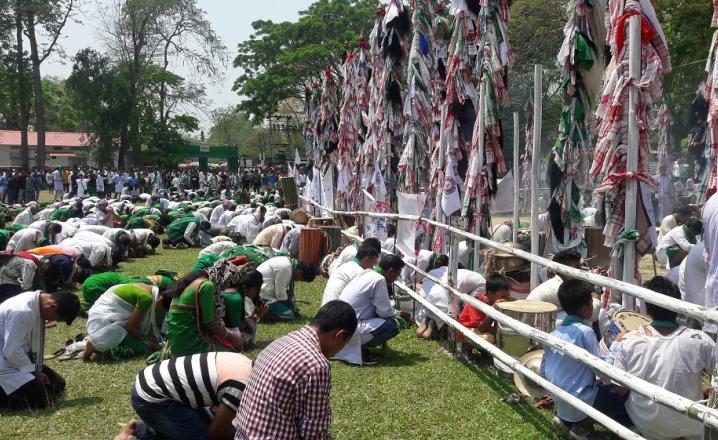 All roads lead to the two day long central celebration of Bah-Gosai Utsav of the Sarania Kacharis and 16th biennial conference of All Assam Sarania Kachari Students’ Union (AASKSU)at Budhiram Das Sarania Samanay Setra near Tangla College in Tangla of Udalguri district as thousands of Sarania-Kacharis from Baksa,Udalguri,Kamrup thronged the venue for their much hyped and celebrated festival observed with a two day long event which concluded on Saturday. Speaking on the open session ,Chairman,Sarania Kachari Development Council,Deepak Deka said,” Sarania Kachari community has grown up in their own culture, customs, traditions, thoughts, rituals and rites. Sarania Kacharis have been democratically fighting for its development as the Saranias are lagging behind in every respect.

In course of his deliberation, hehighlighted the significance of Bah Gosai utsav saying that it iscelebrated every year on the 6th of Bohag by the Saranias with their own customs to mark the occasion of Basanta utsav like other tribal communities where bamboo is worshipped as sacred which we believe heals the mankind from the illness and protects from all the misfortunes and unite mankind”. He appealed to the Sarania Kachari people to carry forward the rich cultural heritage of the community,establish a unique identity in world platform and fight for their existence and development challenging deprivation and suppression. He further lambasted President of Bodoland Janajati Suraksha Mancha (BJSM), Janaklal Basumatary for creating disharmony for his vested interest and exhorted the government to resume issuance of ST certificates to the community at the earliest for the greater interest of the students who will seek admissions into various institutes for higher education.

Speaking on the ocassion President of Axom Xahitya Xabha, Dr. Paramananda Rajbongshi said every ethnic community of state is politically conscious which is a good sign for healthy democracy and every community must have their political and cultural right for the nation to be federal in true sense. He further stated that folk culture proves the identity of any ethnic group of the State and the Axom Xahitya Xabha which is committed to every ethnic communities of state would soon take initiative to  publish the history and folk culture in English and Hindi besides Assamese which would bear testimony to the rich cutural legacy of the community.Distinguished litterateur,Ismail Hussain also addressed the meet as appointed speaker. He said that the ethnic groups of the people – the tribal people, who originated from the Mongolian race, may have their different dresses and food culture, yet they must be identified as ethnic tribal people of the State.The event was presided over by President of AASKSU,Prabin Deka Sarania where Udalguri, Boro Sahitya Sabha, President, Kameswar Boro released the souvenir 'Bah-Gosai'.

28 Apr 2018 - 11:49am | AT News
Kokrajhar: BPF top guns  hunkered down in Kokeajhar on Friday a day after the cabinet expansion where the leaders were not happy for taking away forest portfolio from Pramilarani Brahma....