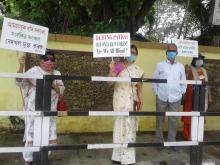 Wahid Saleh from Netherlands with love

15 Jan 2009 - 3:34pm | Arindam Garg
Assam Times: First of all could you please tell us how you spent your early life in Assam and also how you shift to Europe. I was born and brought up at Jorhat. I attended the lower primary school...