Guwahati: Noted tea industrialist Hemendra Prasad Barooah has revealed in a new book about being traced by the ULFA to Philadelphia, about his English acquaintance involved in the Great Train Robbery in the UK, and about the search for Dr Bhupen Hazarika's lost Rolex watch one dark night on a street near Sivasagar. The planter, a multifarious personality, who has remained away from media glare, shares many intimate details of his life with eminent journalist Wasbir Hussain in 'Life and Times: Story of an Assamese Tea Baron', an authorized biography.

The book, published by Spectrum Publications, Guwahati/New Delhi, was released by chief minister Tarun Gogoi at a function in a city hotel here on Saturday. The packed gathering included guests of honour Jahnu Barua, a celebrated filmmaker, playwright Arun Sarma, and Hemen Barooah, the man himself. The book is not just about Barooah, it is also about the times in which he lived and the fascinating people he had encountered from across the world —thieves and conmen, painters and politicians, lovers and musicians, business tycoons and lunatics, god men and frauds, and many more.

Barooah says in the book how on June 11, 1990 he along with 13 other top tea company captains from across India met ULFA leaders at the tea garden bungalow of a leading business family in Dibrugarh after the outfit summoned them to 'discuss the active participation of the tea industry in the economic development' of the state. The then chief minister Prafulla Kumar Mahanta advised Barooah not to meet the ULFA leaders. 'Who advised you to go for the meeting?

I suggest, you don't go,' Hemen remembered Mahanta as having told them. But, the tea captains were prepared to take the risk and face the rebels. Barooah in his biography recounts how they went in three cars to meet the ULFA leaders – the meeting ended just before the crack of dawn with the rebels talking to the planters individually and demanding hefty amounts. The ULFA, however, did not demand any money from Barooah in that meeting. 'An ULFA caller one day threatened to kidnap me from Calcutta. That was the first time I got scared. I could not sleep that night," Barooah said in the book. Such was the pressure from the ULFA that Barooah was even traced in the US where he was on a holiday with his daughter, trying to beat the stress. The phone buzzed at his daughter's home in Philadelphia. "Dada, are you all right? How's your daughter," an ULFA militant said on the phone at a time when there were reports in the media in Assam that he had 'fled' India.

On the lighter side of his life, Barooah in the biography recounts the night when he and Dr Bhupen Hazarika searched for the music icon's lost Rolex watch on a desolate road near Sivasagar, besides his encounter with the man behind the Great Train Robbery in the UK. Hemen narrated many fascinating tales in the book, including his 'secret' meeting with Mrs Indira Gandhi at the Circuit House in Jorhat, and her bus ride to the sleepy town of Golaghat.

The book gives an account of the society in Assam around the time India became independent and after that. It also details how Barooah became the first person from the North-east to obtain an MBA degree from the prestigious Harvard Business School (HBS). In fact, he belonged to the HBS's famous Class of 1949 and has batch mates who went on to transform the destiny of American business. The book talks about Hemen the art collector, the connoisseur of music, Hemen the racing enthusiast, and Hemen the tabla player, having been a disciple of Ustad Munwar Ali of Calcutta.

Speaking on the occasion, Hussain said: " Aside from writing about his life, I have tried to give an account of the challenges facing the Assamese planters during the British Raj. The British, after all, never wanted the locals to enter into the business of tea. The story of Bisturam Barooah, Mr Hemen Barooah's grand-father, is indeed remarkable, because here was a man who displayed both foresight and tact by venturing into forbidden territory, by keeping the sahibs on the right side. The battle with tea giant Williamson Magor, agents of the Barooahs, had indeed been interesting. The links finally got snapped between the Barooahs and Williamson Magor in the early fifties. By that time, Assamese planters had come of age."

Permalink Submitted by Sanjay Biswas on Tue, 07/07/2009 - 10:16
I am overwhelmed by reading the fascinating story of a man who fought for his life and become the pioneer in business of Tea, by avoiding/handling the ULFA problem.

Permalink Submitted by siddhartha choudhury on Sun, 17/04/2011 - 16:13
I am proud 2 be an assamese, as it has produced such a true and successful businees leader of international reckon,inspite of all odds like our tea baron Mr H.P. Barooah....Salute to u..... you will be a role model for many in future...

Public rally in Golaghat by AASU against illegal immigrants 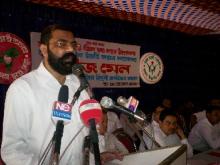 10 Sep 2008 - 10:39pm | Ritupallab Saikia
A public rally was organized by All Assam Students Union (AASU) in Golaghat on 10th September in a bid to sensitise people against the burning problem of illegal Bangladeshi immigrants. A documentary...

6 Aug 2012 - 2:59am | Ranen K Goswami
The Kokrajhar administration claims that the victims of recent clashes in the district are no longer feeling insecure. But the victims tell a different story. Talking to this correspondent, who...

11 Aug 2015 - 2:28pm | AT News
The United Liberation  Front of Asom along with four other north eastern proscribed outfits have given boycott call of the Independence Day.In a joint statement, the outfits urged the people of...
Follow @Assam Times