In grip of puja festivities

4 Feb 2014 - 9:52am | AT News
Today is Saraswati puja. Puja festivity seems to have gripped the schools and colleges, universities and other educational institutes across the state.Dressed in traditional attire, the students and... 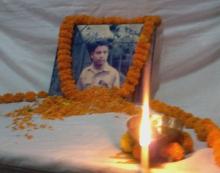 25 May 2017 - 8:42am | AT News
A huge joint team of army and Indian Air Force is believed to have reached Ashrabari along Assam-Arunachal Pradesh to recover the Sukhoi 30 which went missing on Tuesday with two pilots on board....