The State Government is committed to improve agricultural productivity scenario and special initiatives will be taken by the Agriculture department in this regard. This was stated by State Agriculture Minister Pramila Rani Brahma during a press conference held at Guwahati on September 21.

“There are a few drawbacks including decrease of agricultural area that we need to work on by effectively implementing our plans and the department will leave no stone unturned to improve further,” she said.

She also informed that Assam has received the best performance award in the eastern region for successful implementation of the National Food Security Mission (NFSM)-Rice, which was launched in the year 2007-08. The award has been given to the State on the basis of an objective criteria adopted by the Government of India.

The NFSM has been implemented in 13 identified districts of the State including Barpeta, Bongaigaon, Darrang, Dhemaji, Goalpara, Karbi Anglong, Kokrajhar, Lakhimpur, Morigaon, Nagaon, Nalbari, Sonitpur and Tinsukia where the productivity of rice was below the State average.

Permalink Submitted by Barnadhya Hazarika on Fri, 24/09/2010 - 18:24
Nice news for Assam!! But this swing must continue and be more good in near future! 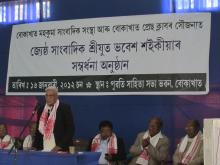 Felicitation to Bhabesh Saikia at Bokakhat