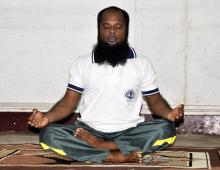 27 Aug 2015 - 11:21pm | AT News
A yoga camp for scribes was organized at Guwahati Press Club today (27 August 2015). Yogbir Humayun Kabir from National Institute of Yoga demonstrated various skills on the occasion, where Rizwan...

13 Dec 2015 - 4:47pm | Drishana Kalita
Can genetic research be used to protect wildlife? Aaranyak, a Scientific and Industrial Research Organisation based at Guwahati, has proven that the answer is a resounding ‘Yes’. After breaking new...