Sitaution is returning fast in and around Kalaigaon area following the tragic incident of attack due to mistaken identity,where 19 people sustained injury at Udmari near Kalaigaon in the wee hours of February 27. District administration of Udalguri and Darrang have taken tough preventive steps to curb violence in both the districts. So far more than 15 people have been arrested and are now in judicial custody. Sadhana Hojai,newly appointed Deputy Commissioner of Udalguri district along with Dibakar Doley,ADC and SR Mili,SP in-charge of Udalguri have visited Kalaigaon several times since the incident.She has been meeting representatives of various organisations and common people requesting all maitaining law and order and communal harmony. Police and para military forces are still patrolling sensitive area round the clock. Dr.Nirupam Hazarika, SDPO, Bhergaon sub-division has been specially monitoring situation at Kalaigaon police station.

A peace meeting was held recently at Kalaigaon on March 2 which was attended by Deputy Commissioner, Udalguri. In the meantime AMSU Udalguri district committee has taken special initiative to make situation normal in Udalguri district.

9 Oct 2014 - 7:00am | AT News
In yet another landmark order, the Gauhati High Court has asked the Centre to clear Rs 10 lakh to Silipi Acharjee whose husband died in army excess.The court directive came out after Silpi moved high...

21 Jan 2015 - 11:32am | AT News
Chief minister Tarun Gogoi is beleived to have finalised the portfolios for the soon to be sworn in ministers.According to Assam Times Political Research Bureau, governor PB Achary will administer... 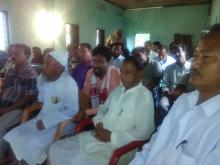