Voice of protest against Akhil Gogoi’s arrest seems to have been spreading nook and corner of the state.

A huge gathering in Guwahati on Tuesday demanded immediate release of the KMSS president who is under police remand in connection with the recent self immolation of a KMSS activist in Dispur.

Noted intellectual Dr Hiren Gogoi slammed the government saying that he was dead opposed to self immolation but in the same breath he said that the government is trying to gag the voice of protest against rampant corruption in public life.

21 May 2014 - 5:33pm | Hantigiri Narzary
The activities of theft has been run over in Kokrajhar town where the police recovered six sets of computers including various material sets from North Shukanjhora village on Wednesday under...

6 Oct 2012 - 11:48am | editor
CPM leader Prakash on Friday came down heavily on the UPA government for the recent decision to increase the FDI insurance and the pension bill. Addressing a public meeting in Chirang on Friday... 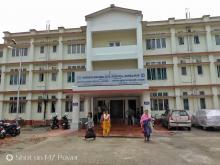 11 May 2019 - 7:42pm | AT Kokrajhar Bureau
Three persons were killed and six others serious injuried due to lightning at various places in Kokrajhar district on Saturday. Nareswar Basumatary (55) Lakhan Basumatary (35) of Takumpur,...