Marathon interrogation is in progress on Akhil Gogoi a day after police got the KMSS president in their remand in connection with the recent self immolation of Pramod Boro.

A special team of police probing the sensational case has been interrogating the peasant leader in connection to the self immolation case where he is charged with instigating the KMSS worker to take this extreme course of action on February 24.

Authorities are tightlipped on his confessional statement.

The same investigation team continues to grill five other KMSS leaders in this connection.

Kamrup CJM on Sunday remanded Gogoi to police custody for four days when he was produced before it.

He would be produced before the same court on Wednesday. 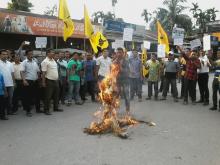 9 Apr 2016 - 10:32pm | AT Kokrajhar Bureau
The Kokrajhar and Chirang district magistrates promulgated today an order under Section 144 CrPC prohibiting movement of any persons, materials, vehicular traffic of any description from either side...