A road accident has created no less tension in Tezpur on Friday where an irate mob spared not even policemen and journalist.

The road accident took place at 11 in the morning where a women, identified as Rubia Begum, was killed on the spot at Bhitior pora under Mohabhoirab police outpost.

Local residents in large number who took to the street turned violent where policemen who rushed to the spot were attacked along with media people.

Senior police officials rushed to the spot and brought the situation under control.

16 Nov 2014 - 10:04pm | Hantigiri Narzary
The Bodo Tunlai San (Bodo Literary Day) was observed in the Bodo-medium institutions with colourful programmes on Sunday. The day was observed by district and primary committees of the Bodo Sahitya...

31 Aug 2011 - 2:48am | Ritupallab Saikia
The extremist outfit All Adivasi National Liberation Army (AANLA), which was formed in the year 2004 in Nahortoli located in the sensitive area of Assam-Nagaland Border under Golaghat district for... 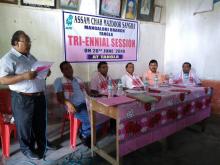 23 Jun 2018 - 8:21pm | Shajid Khan
TANGLA: In a historic change to the committee of the largest trade union organization of labourers in tea gardens of the Assam Valley in north-eastern India,Assam Chah Mazdoor...