Rhino poaching strikes Kaziranga in Assam again. Yet another one horn rhino was killed by the poachers in the national park on Thursday hours after two poachers were killed in encounter with forest guards.

A full grown rhino carcass was found in Burahpahar range of the national park on Thursday afternoon. The horn was missing.

The incident took place hours after forest guards killed two poachers at an encounter in the world heritage site. The encounter took place in the Burapahar range where three others poachers are believed to have escaped.

30 Jun 2008 - 7:58pm | editor
Corrupt practices by politicians are not a new phenomenon. It can be conceded that it has begun from the colonial era. But it took a wide shape in post colonial period. From the very date of freedom... 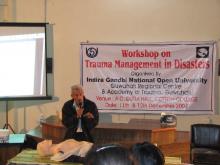 Workshop on Trauma Management on disasters

13 Dec 2009 - 8:25pm | nabajit_dutta
A two-day workshop on “Trauma Management on disasters” was organized by the IGNOU, in collaboration with Academy of Trauma at the A.C.Dutta auditorium of Cotton College Guwahati on 11th...

Focus now on: Will Modi deliver?

14 May 2014 - 8:56pm | Rajiv Roy
With the biggest event on earth coming to an end the stage is now set ostensibly for the NDA to take over the reins at 7 Race Course Road, New Delhi. The exit polls that are doing the round now is...