Roads in Guwahati city are not wearing a normal look on Tuesday following 12 hour bandh called by KMSS in protest against Pramod Boro’s death after self immolation attempt.

Bandh supporters in several places are trying to disrupt normal movement of traffic by burning tyres on the streets.

Bandh supporters in Jorabat area burnt down a truck before staging a road blockade which lasted for two hours.  Police have already detained at least 20 bandh supporters for disrupting normalcy in the city. 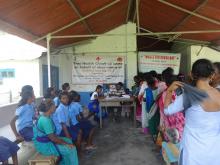