Congress vice president Rahul Gandhi on Monday assured the north east people in New Delhi of help from his part to ensure their safety and security in the national.

Gandhi, who visited the agitating north east people at the Jantar Mantor said that he would mount pressure on the competent authority to ensure safety of the people hailing from this region.

He further expressed grave concern over the death of Nido Tania in goons attack in South Delhi. 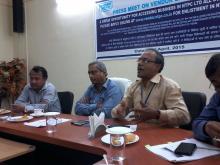