The 65th Republic day  observed  peacefully at Nazira sub division today. The central ceremonial programme was held at Nazira play ground where Mousumi Baruah, SDO Civil hoisted the National  Flag at 9-30 AM and received the guard of honour. Several distinguished  persons and well known  NGO Pragati of Nazira were awarded in the Republic Day function for their service towards the socio-economic development  of the area. No unwanted incidents were reported. 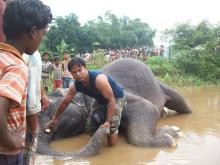 27 Dec 2014 - 12:36pm | AT News
Stereotype writings have both positive and negative aspects. But these writings are not very encouraging for the north eastern region. This is more or less of what the noted writers said at a session...

20 Jul 2015 - 9:25am | Jintul Talukdar
Bajali AJYCP unit felicitated 30 HS and HSLC pass outs at a function encouraging the student fraternity in the entire are on Sunday.Presided over by Mridul Talukdar, the function at Puthimari LP...