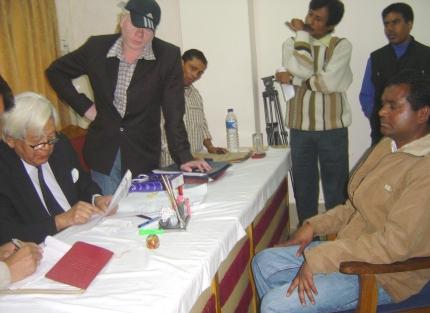 More than one hundred Adivasi people rushed to Guwahati on Wednesday to depose before the Justicer Manisana panel probing the Beltola incident but the chairman invited three of them to brief the infamous violence. Led by AASAA, these Adivasi people hold a rally in front of the Commission office demanding an impartial enquiry into the violence. Mostly, of them came from Kokrajhar, Udalguri and Nagrijuli. Those three who deposing before the commission were Lakhi Orang Ramsingh Tappu and Agtha Kerkata. On Tuesday former Kamrup Deputy Commissioner Avinash Joshi, magistrate C K Bhuyan deposed before the commission.

7 Oct 2012 - 5:50am | editor
The Gauhati High Court has given Centre and Assam government four weeks to apprise it of the steps taken to check rhino poaching in Kaziranga. Taking up a suo-moto cognizance of reports on...

1 Jun 2008 - 1:22am | editor
Good news. Really a good news for the state government employees as the Assam Government has set up the Sixth Pay Commission headed by former Union Secretary Bhaskar Baruah. A notification issued to...