Guwahati: Assam Chief Minister Tarun Gogoi has left for US on a visit to North America during which he will participate in some diaspora meets and hold talks with potential investors. Gogoi will take part in the Assam Convention in Boston on June 30 and July 1 before going for a get-together of the Assamese population diaspora at Maryland near Washington. Popular Bollywood singer Zubeen will perform on two consecutive days at the meet.

On the other hand, another 12 member team of ministers and officials led by Minister for north eastern development Mani Shankar Aiyar and Assam revenue Minister Dr Bhumidhar Barman is visiting Pakistan from June 30 onwards. 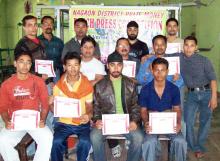 20 Dec 2008 - 12:19am | editor
The Central Bureau of Investigation begins its probe into the October 30 serial blast in Assam along with the cases of communal violence in its Udalguri and Darrang districts in the first week of...

Give up idea of secession, we are integral part of India - Sahitya Sobha
YWOA for renewal of peace process
Alliance of AGP- AGP (P) on cards
Machkhowa blast toll rises to 6