Guwahati : Defying all security dragnets of the unified command structure imposed in trouble-torn Assam, the outlawed ULFA today blew up a powerful IED bomb at a busy market of Machkhowa in Guwahati, the gateway of North Eastern region in the morning killing at least six persons including an infant, and injuring as many as 20 others .

The blast took place at the busy Mackhowa vegetable market around 7.50 a.m. The bomb was strapped to a bicycle kept near the entrance of the market, according to Additional SP City Nanda Singh.


The explosion was of very high magnitude and killed five persons on the spot. The deceased include an infant about six to seven months old, Singh said. As many as 20 people were injured in the blast. One of them succumbed to his injuries in a hospital. All the injured have been shifted to GMC Hospital here with multiple wounds in their chest, face and abdomen.


Police claimed it is a handiwork of outlawed ULFA fighting for an independent Assam since 1979.
However, ULFA is yet to claim its responsibility. 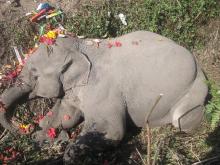 16 Nov 2008 - 11:13pm | editor
Till the other day Ganeshguri area in the cuty was teeming with buyers and sellers. But its the serial blast that have turned the place into a graveyard in broad day light. The fruit and vegetable...

Give up idea of secession, we are integral part of India - Sahitya Sobha
YWOA for renewal of peace process
Alliance of AGP- AGP (P) on cards
Assam CM Gogoi departs for North America