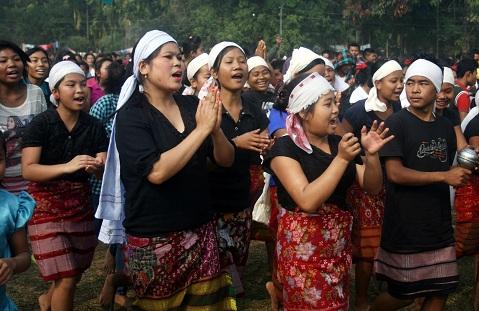 Christmas may be a religious celebration to mark the birthday of Jesus Christ but it is more than just a one day affair in Meghalaya's Garo Hills. The five district of Garo Hills remains soaked in merriment as people from all walks of life celebrated Christmas with solemn and gaiety.
For many, Christmas means light, colour, cakes, christmas tree and Santa. But for the Garos', it is beyond. There is an age old practice called the Song Kristan Dance, which means Christian Dance from the village.
"It is basically a dance form, which was celebrated since time immemorial by our forefathers, when they accepted Christ as their saviour", said Benjibosh D Sangma of Dainadubi, who is also the Secretary of a club, instrumental in keeping this tradition alive.
Dainadubi in North Garo Hills district has been an hub for a mass performance of Song Kristan Dance. The faithful, along with their friends and relatives take to street every year to perform the Song Kristan Dance. 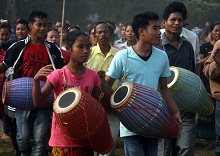 Singing Gospel in local dialect to the tune of indigenous drum beat, thousands of faithful march praising Jesus Christ and engage themselves in merriment.
It is otherwise perfomed in different localities. Mostly children and youths from the village goes around singining and dancing to different households. They collect donation, which is used for mass picnic and feasting during Christmas and New Year.
"The mass Song Kristan Dance is being celebrated in Dainadubi for about two decade now. The main aim is to give impetus to our culture and Garos' way of celebration. The season of Christmas provides the perfect time for us to host the event as most people are back home and can take part", remarked Benjibosh D Sangma.
The event was held on December 27, 2013 under the aegis of Nogolpara Club. About 5000 people from 35 localities from Resubelpara and Dainadubi participated in the event, which started at 10 am and culminated at 3 pm.
Some say that the influence of modern film songs and dances has made the event a necessity as the traditions of Garos' needed to be kept alive.
Meghalaya CM Dr. Mukul Sangma has recently mooted promoting the state as a Christmas and New Year destination. The promotion and branding of such event will surely be a welcome exercise. As the event demonstrates the exuberance and spirit of the Garos'.

3 Mar 2018 - 9:22pm | AT News
Kokrajhar, Mar 3: An unidentified body struck no less sensation in Kokrajhari on Saturday after somebody dumped it in the evening. Local residents in Ward No 19 told Assam Times that they spotted...

7 Oct 2012 - 5:50am | editor
The Gauhati High Court has given Centre and Assam government four weeks to apprise it of the steps taken to check rhino poaching in Kaziranga. Taking up a suo-moto cognizance of reports on...