Learn and Earn initiative for women at Kalaigaon 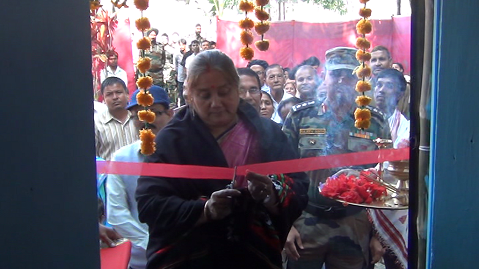 A weaving and sewing centre for women was inaugurated at Adarshagaon near Kalaigaon on December 9. The centre was sponsored by Army camp Chapai, Mangaldai under the wings of Red Horns Division in association with SHO Kamdhenu of Kalaigaon. Women of the locality headed by Khira Deka and other 50 women of the locality joined hands with army for the establishment of the centre. Gitanjali Dutta,ADC, Darrng inaugurated the centre in presence of hundreds of women,girls and people at 11 am.

Col.Rajiv Sing, Commanding Officer of Chapai camp attending the inaugural ceremony as the chief guest thanked the women of Adarshagaon for coming out to learn and earn. On the occasion he said-” Teach a woman,teach a family and empower a woman empower the whole society. With the gender equality and rise in education-standard s of the women of today are equally progressive in their outlook and they want to fulfil their desired dreams”. It needs mention that army has donated five sewing machines, seven electronic sewing machines and seven weaving hand looms for the centre. Several distinguished people namely- RN Sinha, BDO,Kalaigaon; senior social worker Mahendra Saikia etc were also present on the occasion.