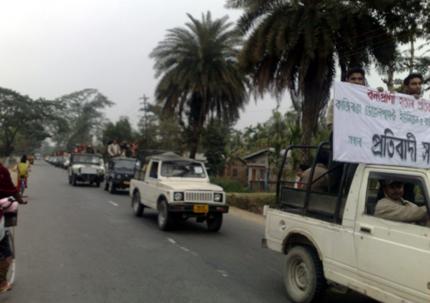 A car rally was organized with 64 jeeps from Kaziranga to Bokakhat by Kaziranga Jeep Safari Union, Kaziranga Devlopment Union and Kaziranga Greenland Society, to protest against killing rhino, appealing forest minister to take appropriate actions towards save the rhinos of Kaziranga. Photo: Kaushik Hazarika, Bokakhat.

16 Sep 2013 - 9:43pm | AT News
Chief Minister Tarun Gogoi said that Narendra Modi will never come as the Prime Minister. Talking to reporters, Gogoi said that BJP is focusing only on Hindu votes. He said Modi has links with the...

16 Jul 2014 - 8:29am | AT News
Prafulla Kumar Mahanta made it plain and simple that he won’t take back the resignation he tendered as party president on Monday. Senior AGP leaders told Assam Times that despite requests from...