Nazira police arrested 3 persons namely Manasjyoti Gogoi, Niranjan Gogoi of Nazira and Depan Gogoi of Simaluguri for demanding money on last August 22 and recovered several mobile phones from them. According to the police, the three persons were involved in demanding money in the name of ULFA from various persons of Guwahati, Duliajan, Tinsukia, Digboy, Amguri etc. A police team lead by the SDPO Nazira Ashif Ahmed and OC Nazira Sanjiv Gogoi arrested them. A case is registered in Nazira police station under IPC 387. 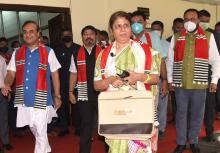 2 Apr 2016 - 11:31am | Sasanka Talukdar
The people of Patacharkuchi in Barpeta district are witnessing pathetic conditions of progress in their constituency.The goverment despite its efforts have failed to take development to the...