Union minister for information and broadcasting Priya Ranjan Dasmunshi on Tuesday said the freedom of media is an art of democracy but he cautioned the media tribe against any attempts to sell sensation while disseminating news and views for the general public.

Addressing a function in Guwahati on the occasion of third anniversary of a vernacular daily Mr Dasmunsi maintained that journalism in the north eastern region has been a challenging task besides being a purely professional one observing that their job is not less than protecting the country.

In his address Chief Minister Tarun Gogoi suggested a set of guidelines for the Assam journalists to make the state’s media more vibrant. He said a few senior journalists would have to come out to prepare these guidelines. This would, he said, help the media eliminate the proprietorial journalism slur. In his address, proprietor Anjan Dutta said announced tha t he would soon bring out an edition for the lower Assam and thanked the people of Barak valley for their response. Editor of the vernacular daily Radhika Mohan Bhagawati along with senior journalists Adip Phukan, Atanu Bhuyan and Bhupen Bhattacharjee were felicitated in the function. 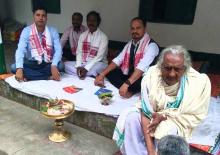 No change in flood fury

25 Aug 2010 - 10:47pm | editor
Incessent rains have flooded in Assam displacing at least 50,000 people in Lakhimpur and Dhemaji districs. According to information, Singora river, a tributary of the Brahmaputra river is...