18 Dec 2018 - 11:31am | AT News Imphal
IMPHAL: The Manipur Pradesh BJP on Friday mocked the opposition Congress party, saying the party is happy that the state unit of the grand old party has taken some ‘no longer useful’ veteran... 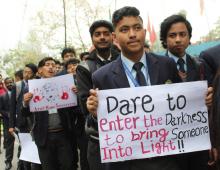 27 Oct 2019 - 9:19pm | CM Paul
Sonada: The Women’s Cell of Salesian College Sonada along with Radio Journalists (RJ) of Radio Salesian organized a rally on 25th October 2019 to create awareness on the need of child support and...