Senior AGP leader Brindabon on Thursday refuses to contest from Tezpur alleging utter disappointment of Joseph Toppo who is a strong contender in the race for ticket.

Goswami has asked the party leadership to field Toppo from Tezpur and to bring Padma Hazarika back to the party.

Notably, the party is considering the name of Brindabon Goswami in lieu of the sitting MP. 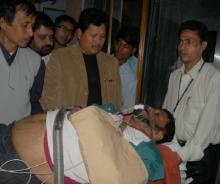 26 Jan 2018 - 8:55am | AT News
GUWAHATI: Defying rebel diktat national tricolour is fluttering in the sky of Assam as the north eastern state joined the nation wide 69th Republic Day on Friday. Governor Jagdish Mukhi is unfurling...