According to information,the agitation will continue till disciplinary action is not taken against the accused principal. Thousands of students of the college wore black badges to show support to the agitators. A public meeting was also held at the site which decided to continue the agitation without effecting normal teaching in the college. Social workers Kami Ram Saharia, Kamal Prasad Sarma (Mouzadar), Bakul Sarkar, Dandi Kumar Bodo and others strongly condemned immoral acts of the principal and requested government immediately to suspend Arabinda Das till found not guilty by appropriate authority. It is known that the matter will be referred to Secretary and Director of Education,BTC; Deputy Commissioner and Inspector of Schools,Udalguri district. In the mean time Dipen Bodo, Advisor of Udalguri district ABSU told media that they would probe the incident of their own. It needs mention that wife of the principal had filed an FIR at Kalaigaon police station on August 4 alleging mental torture,domestic violence against her husband. She and her two daughters told media persons that her husband had been torturing them for last twenty three years and had illegal affairs with other women and girls. Following the allegation, police had brought the principal to Kalaigaon police station for interrogation but released without proper investigation causing public uproar in the district.

23 Feb 2015 - 8:28pm | Hantigiri Narzary
An awareness meeting on implementation of updation for National Register of Citizens (NRC) was held on Monday at DC office conference hall with PK Bhagawati, Kokrajhar ADC and In-charge of NRC in the...

5 Dec 2007 - 9:38am | pbaruah
The Autonomous State Demand Committee (ASDC) is striking a deal with the BJP to form a coalition North Cachar Hills Autonomous Council (NCHAC .Speaking to assamtimes over telephone from Haflong, ASDC... 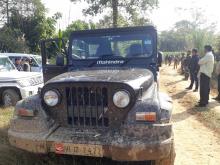 16 Dec 2017 - 9:51pm | Mithun Baruah
KHANDUBASTI: Army, police and paramilitary forces deployed in search of Arunav Phukan have been concentrating on Khandubasti where suspected ULFA-I rebels are believed to have been hiding with the...