A few disturbing inputs available with police forces the authorities to keep Assam on alert. According to IB inputs, a group of ULFA militants has arrived in the state to monger trouble in the run up to the Independence Day. This is apart from the fear of martyrs day on Saturday. The Home department sounded high alert across the state following three grenade explosions in Lakhimpur and Karbi Anglong district in the past 36 hours, where two people were killed and 9 others injured. A highly trained 35-member ULFA group is believed to have entered the state at the instance of ULFA c-in-c Paresh Barua. Baruah asked them to make grenade attacks in five districts of upper Assam and Guwahati city. 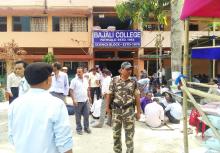 14 Jul 2015 - 1:03pm | AT News
Chief minister Tarun Gogoi makes it plan and simple on Tuesday that he would contest the next assembly polls early next year.  Talking to reporters after attending a meeting with Rahul Gandhi in...